Towards a Definition of Accessible Touirism

It is interesting that while accessible tourism has been developing as an area of academic study and industry practice, there has been relatively little discussion defining the field. Most study has focused on the experiences of people with disabilities while travelling without an articulation of the defining elements of the field. My own Ph.D. took such an approach where it drew its definitional inspiration from the theoretical areas of disability studies (see Gleeson, 1999; Oliver, 1996), leisure constraints (see Daniels, Drogin Rodgers, & Wiggins, 2005; Jackson & Scott, 1999), tourism systems (see Leiper, 2003; Leiper, Stear, Hing, & Firth, 2008) and human rights approaches (see Darcy & Taylor, 2009; United Nations, 2006) to propose a Comprehensive Tourism Access Model (CoTAM) as a way to understand the experiences that people with disabilities have while travelling (Darcy, 2004). As we can see by Figure 1, CoTAM provided a way to articulate the relationships between these very different bodies of theory. 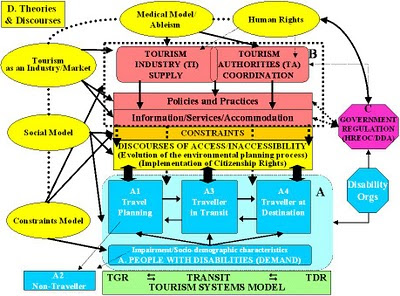 Yet, at this stage of my research I was very much focused on the relationship between disability and tourism where the development of a body of knowledge that we now call accessible tourism was a logical progression. Not long after the completion of my PhD I started to think more broadly about definitional issues and what constituted accessible tourism. An opportunity arose to develop A Research Agenda For Accessible Tourism in Australia through funding provided by the Sustainable Tourism Cooperative Research Centre. The agenda was the outcome of a national workshop that brought together 50 they told was from the tourism industry, disability advocacy movement, government representatives and individuals with expertise in the area. The workshop used a series of focus group activities to brainstorm the issues facing disability and tourism from each of the stakeholder perspectives. In writing up the ideas captured in the workshop, I brought together the literature that discusses the relationship between disability and ageing (see Australian Bureau of Statistics, 2004; World Health Organization, 2007), disability studies, universal design (see Center for Universal Design, 2009; Preiser & Ostroff, 2001), building codes (see Standards Australia, 2009; U.S. Architectural and Transportation Barriers and Compliance Board (Access Board), 2002; UN ESCAP, 2008) and human rights approaches to disability. Through examining the ideas outlined by the approaches and what people contributed in the workshop I proposed that accessible tourism could be defined as,

… a process of enabling people with disabilities and seniors to function independently and with equity and dignity through the delivery of universal tourism products, services and environments (adapted from Olympic Co-ordination Authority, 1999). The definition is inclusive of the mobility, vision, hearing and cognitive dimensions of access (Darcy, 2006, p. 6).

More recent work with Dr Tracey Dickson on Alpine Accessible Tourism (Dickson & Hurrell, 2008) has provided an extension to this definition through the Whole of Life Approach to disability (Darcy & Dickson, 2009). This approach has a nexus to universal design where access is not isolated to disability but is more broadly linked to people’s bodily states over their lifespan. This provided the opportunity to be far more inclusive of a broader group of people who benefit from access provisions. The following definition incorporates these ideas:

Accessible tourism enables people with access requirements, including mobility, vision, hearing and cognitive dimensions of access, to function independently and with equity and dignity through the delivery of universally designed tourism products, services and environments. This definition is inclusive of all people including those travelling with children in prams, people with disabilities and seniors (Darcy & Dickson, 2009, p. 34).

More recently we have been drawing on the destination management approaches to suggest that tourism industry needs to provide high quality accessible destination experiences to provide a ‘sense of place’ so critical to tourism. These ideas have been developed and implemented through the Alpine Accessible Tourism project as well as the Visitor Accessibility in Urban Centres project (Darcy, et al., 2008) and Tourism Australia’s Accessible Drive Tourism Routes (Cameron, 2008). From these projects it is proposed that accessible destination experiences can be defined as:

I would like to ask those of you reading these ideas to contribute your thoughts so that we can develop a more robust basis on which to define and research the field.

UN ESCAP (2008). Disability at a glance: a Profile of 28 Countries and Areas in Asia and the Pacific (Vol. 2002,  Available from http://www.unescap.org/esid/psis/disability