A colleague, Scott Rains of the Rolling Rains Report, alerted me to the Snow Mountains accessible tourism resources (Snowy Mountains Regional Tourism Association, 2010). What Scott didn’t know was that the resources are an excellent example of operationalising previous research and value adding through new research. The resources were developed as part of the Australian Accessible Alpine Tourism project (Dickson & Hurrell, 2008). The Alpine Accessible Tourism Project was funded under Ausindustry’s Australian Tourism Development Program and was co-ordinated by Disabled WinterSport Australia (DWA). The project built on DWA’s 30 years of providing snow sport experiences and sought to develop, document, market and promote accessible summer tourism experiences. Within a participatory action research (Denzin & Lincoln, 2003) and destination management approach (Laws, 1995; Ritchie & Crouch, 2002). The methodology involved:
Photo 1 is from the launch of the CD-ROM that culminated in a hike up Mt Kosciuszko, the highest peak in Australia, to celebrate the  the International Day for People with Disabilities in 2008. Participants included representatives of all access groups, including five people using wheelchairs, one person with a guide dog, a mother with two children in a cycle trailer and several older people. The hike was by no means easily accessible with the gradients and surface not compliant to Australian Standards for Access and Mobility (Standards Australia, 1992a, 1992b, 2002, 2009)but in the spirit of adventure tourism the participants with access considerations accepted the challenge and the inherent risk involved. Other Australian destination management projects and local government approaches Including have been summarized in Darcy and Dickson (2009).
Photo 1: Mt Kosciuszko Trek 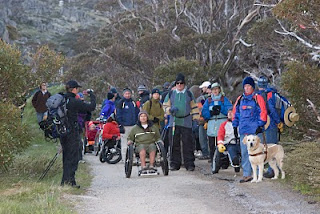